How to go to Naxos Greece

Places to Eat in Naxos

Places to See in Naxos

Things to do in Naxos 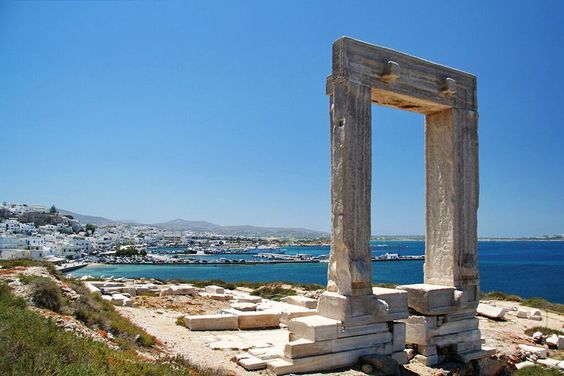 Ideal for families and romantic couples, Naxos Greece is famous for the exotic beaches. Plaka, Agios Prokopios, Orkos and Mikri Vigla are among the most beautiful beaches on the island, while the coastline is ideal for windsurfing and kitesurfing.

Naxos is the largest island of Cyclades and it is located in the center of this complex, between Paros and Mykonos. According to mythology, this was the nuptial isle of the god Dionysus, god of wine. This is why there is a sanctuary dedicated to Dionysus in the inland of Naxos island.A drive to the inland will bring you to picturesque villages and interesting sightseeing.

Visit the Archaeological Museum, housed in a historic building of the Venetian Period, housing finds from the Early Neolithic Age up to the Early Christian (Paleochristian) Period and an interesting collection of Cycladic figurines.

Discover the varied geomorphology and biodiversity of the island by following breathtaking routes all around the island (Hora–Melane-Halki, Halki–Danakos-Apeiranthos, Skado-Apollonas, etc.); follow the hiking trail from Apeíranthos (or Apérathos) to Moutsouna beach along the emery mines (12 km) and the breathtaking view to the Archipelago (all the way!) will make it up to you! Climb to the top of Zas Mountain, Cyclades’ highest mountain (1,004 m) and Fanári Mountain (908 m) or follow beautiful biking routes around the mountains! On your way to Zas’ top, don’t forget to visit the beautiful cave of Zas, that used to be dedicated to Milosios Zeus and observe its impressive stalactite formations.

Explore traditional villages spread around the island, with a particular, “magical” character: Apérathos is a colourful mountainous village boasting five museums, stone-built houses, beautiful squares and narrow alleys paved with marble, and Panayia Drosiani, a beautiful church of the Early Christian Period! Filoti, built on the top of a rock, is a picturesque mountainous village surrounded by lush vegetation with cubic shaped houses and narrow stone-paved alleys. The 9th-10th century church of Panayia Protothroni, situated at a close distance, is the biggest Byzantine church of Nàxos with murals of great value. The community of Sagri consists of five small villages (Ano Sagri, Kato Sagri, Kanakari, Kastraki and Mikri Vigla). You will feel admiration before the Venetian towers, the traditional windmills and a number of major Byzantine churches, like Ayios Mamas, all of which make Sagri the Mystras of Náxos albeit on a smaller scale! Close to Sagri lies the 6th century BC Demeter and Apollo sanctuary, made exclusively of white marble.

How to go to Naxos Greece

Places to Eat in Naxos

Places to See in Naxos

Things to do in Naxos