How to go to Samos

Places to Eat in Samos

Places to See in Samos

Things to do in Samos 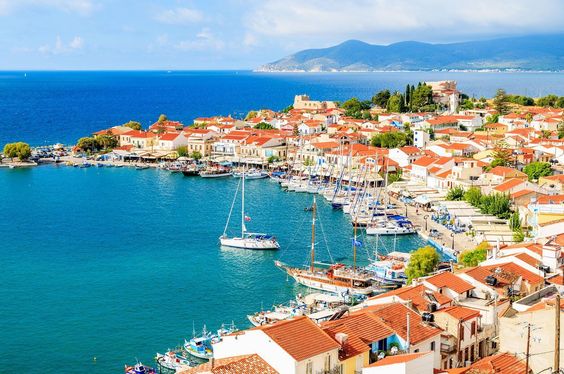 1. VATHI Vathi, the island’s capital, biggest town and main port, may not serve as an ideal esplanade for strolling, but it does boast several worthy neo-classical buildings and mansions. All date back to when Samos was run autonomously under the Ottoman Empire before uniting with Greece after the first Balkan War in 1912.

2. THE BEACHES
The island’s beaches cater to all tastes. Ranging from cosmopolitan to remote, some are covered with fine sand, others with pebbles. The range includes organized beaches with deck chairs, beach umbrellas and beach bars to remote shelters for sea gulls and Mediterranean monk seals.

Potokaki and Kokkari are particularly popular among tourists from abroad. Vathi locals usually opt for the beaches in the Nisi area. Some of these spots are located closer to the Asia Minor (Turkish) coastline than to any other part of the island. The historic Mycale Strait, separating Samos from Turkey, is only 1.3 kilometers wide at its narrowest point.

Lemonakia, Tsamadou, Tsabou, and Avlakia are all popular beaches in the northern part of the island, while, in the southwest, the beaches in the Marathokambos area are strong attractions. Potami, in the northwest, ranks as one of the island’s most impressive beaches. If looking for memorable experiences, take the 30-minute hike from Potami  over the old cobbled path that leads to the astonishing beach of Seitani. If the yachts choose not to drop anchor there, you could find yourself alone with the seals!

3. TEMPLE OF HERA AND THE ARCHAEOLOGICAL MUSEUM
During ancient times, visitors to Samos would travel to the island exclusively for the Temple of Hera, a renowned monument throughout the ancient world. It remains a special spot for visitors  today. A UNESCO World Heritage Site, it is located five kilometers from the Pythagorion by the Imvrassos river mouth, where, according to legend, the goddess Hera was born.

4. PYTHAGORION AND THE TUNNEL OF EUPALINOS
Located by the airport, Pythagorion, the island’s most popular destination, has been a cosmopolitan spot throughout its history. The ancient city began flourishing from as far back as the 6th century BC. It possessed a dominant port and renowned fleet that sailed the seas of Europea, Asia and Africa. These days, visitors marvel at the city’s impressive ruins: endless fortification walls, mansions with mosaic floors, parts of the ancient port, and the restored ancient theater.

5. SAMOS WINE
Thousands of hectares of vineyards, predominantly of  the Muscat grape variety, are cultivated on the island’s Mount Ambelos (Vineyard). The wines produced by the UNION OF VINICULTURAL COOPERATIVES OF SAMOS (EOSS)  have won international awards and are enjoyed around the world. If interested in trying these wines and learning about their history, visit the Samos Wine Museum  in Vathi. The museum highlights the island’s association with wine, dating back to antiquity as documented by the ancient Greek physicians Hippocrates and Galenus.

6. POTAMI GORGE
Entering the little gorge above Potami beach is the best bet for a good time. A short path first leads to the gorgeous Metamorphosis tou Sotiros Byzantine church. From there a track  alongside a densely vegetated creek leads to a small inlet between the stone walls. Do not hesitate to abandon clothes and shoes and plunge into the river waters here.

7. KARLOVASI AND THE TANNERIES (TABAKIKA)
Famed Karlovasi dominates the  western part  of Samos, and is also the island’s secondary port. It  is divided into five districts, Palio, Neo, Meseo, Limani, and Ormo, and is enlivened by the  presence of students enrolled at a branch of the University of the Aegean. Karlovasi owes its multifaceted nature  to the delightful  little stores lining  the tiled exterior paths; Palio (old) Karlovasi, graced with picturesque houses and narrow streets; as well as the town’s spectacular sunsets, as viewed along the coastal front. The celebrated Greek poet Yiannis Ritsos, one of the country’s most prominent literary figures of the 20th century, was said to be fond of  gazing out at the sea from here.

8. MOUNT KERKIS AND THE SHIPYARDS
The sight of Mount Kerkis alone, is breathtaking. An imposing mountain in the western part of the island, it is the Aegean Sea’s second largest, after Fengari in Samothrace. The peak at Kerkis, named Vigla, reaches an altitude of 1,443 meters. Visible from a distance and characterized by inhospitable conditions, it was not ascended until the 9th century AD, when ascetics of the period, mountain climbers and predators dared to explore its higher reaches. Caves, chapels, gorges, rivers, and forests feature along the slopes, while the trekking routes are magnificent. A very short route from the bay leads to a cave where ancient philosopher and mathematician Pythagoras, who hailed from Samos, hid while under pursuit by Polycrates, the island’s tyrant.

9. THE MOST ELEGANT VILLAGES
There are a total of thirty-three inhabited villages on Samos. The most fascinating are  Vourliotes and Manolates, located on the lush slopes of Mount Ambelos. Vourliotes is graced by the shadiest of village squares, entirely covered by the foliage of plane trees.  The village  also offers wonderful walking opportunities through lively alleys lined with beautifully- maintained houses, featuring multi-colored window frames and potted plants

10. PYTHAGOREAN CUP
The renowned Pythagorean Cup was designed and produced by Pythagoras in the 6th century BC. It essentially represented an achievement in hydraulic technology that was, later, further developed by Frenchman Blaise Pascal in the 17th century. A line inside  the Pythagorean cup, used by ancient Greeks for wine drinking,  indicated the drinking limit. If the wine content exceeded this line, then the clay cup would instantly empty through the activation of a smart mechanism.

How to go to Samos

Places to Eat in Samos

Places to See in Samos

Things to do in Samos